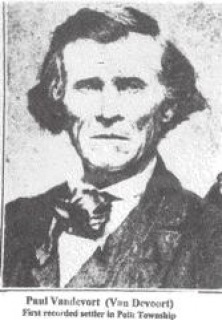 Polk Township officially came into existence February 11, 1851.  It was taken from Warsaw and Snyder Townships, forming the twenty-first township in Jefferson County, and named in honor of James K. Polk, the eleventh president of the United States.  It is bounded on the north by Elk County and Heath Township, on the east by Snyder, on the south by Warsaw and on the west by Warsaw and Heath.

Nearly all of the township is drained by the North Fork Creek, with smaller streams of Hetrick Run, Manners Run and the Lucas Run flowing into it.  These smaller streams were named for early settlers.  The North Fork was used in rafting logs down stream with the aid of splash dams.  The dams were filled with logs in the spring of the year, then the gates lifted and the logs splashed down stream to the next dam, with Pittsburgh the destination.  Today, you can see evidence of where these dams were located.  This era in our history gave rise to the famous "River Pilots".

The above information was excerpted from the "History of Polk Township" by Joyce (Wingard) Holt which was published with the help of many members of our community to celebrate the 150 year anniversary of Polk Township in 2001.